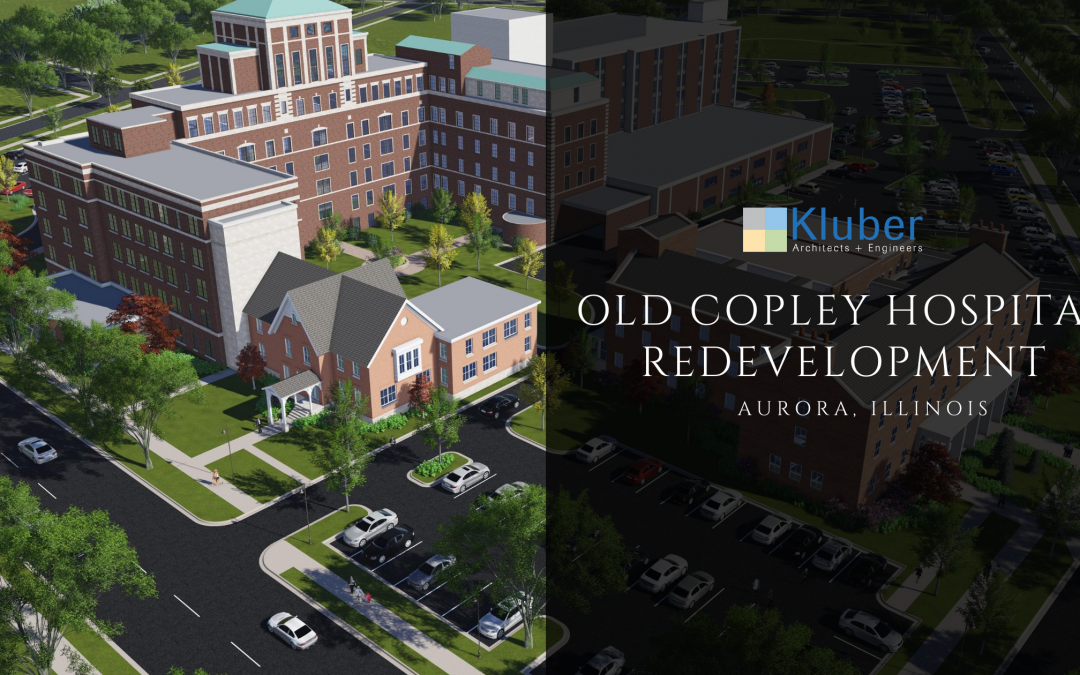 If you’ve made your way into the city of Aurora, Illinois since 1995, chances are you’re familiar with Old Copley Hospital. While it was once a thriving medical center, it was abandoned in the early 90’s. Since then, the property has been subject to all sorts of damage, ranging from vandalism to black mold.

As part of Aurora’s efforts to redevelop and improve the city, the building is being restored. Soon enough, the campus will be revitalized into senior housing, educational facilities, apartments, and health care offices.

Kluber Architects + Engineers was selected by Fox Valley Developers and Konrad Construction to restore the facility to a new vision. Before it makes its debut, take a moment to learn more about the property and its plan for the future!

“This has been such an exciting project that all started with the idea of transforming an abandoned hospital campus, which had become a scare on a once vibrant neighborhood, into the catalyst of regeneration for this east side Aurora neighborhood.”
-Mike Elliott, Senior Design Architect at Kluber

When Was Old Copley Hospital Built?

Old Copley Hospital was originally built in 1888. The facility, located on Lincoln Avenue, was much smaller than the hospitals we see today, with approximately 25 beds for patient care.

In 1931, the hospital expanded and cost around $235,000 to build. Architects Schmidt, Garden and Erikson designed the new facility, which featured limestone sheathing, classical pilasters, and other impressive features.

Local politician and Aurora resident Ira Clifton Copley made a hefty financial contribution to the hospital expansion. As such, the property was renamed in her honor as Copley Memorial Hospital.

From 1931 to the 1970’s, several additions were added on to Copley hospital. This expanded its local footprint significantly, with the campus eventually growing to 341,000 square feet and seven different buildings.

When Was Old Copley Hospital Abandoned?

Old Copley Hospital was abandoned in 1995. It operated at the Lincoln Avenue location for over 60 years before it became vacant. A new hospital location was built in the 90’s, so the original facility closed its doors.

Sadly, the property owners left many valuables behind. In fact, an MRI machine even remained at the building until restoration efforts began!

Since its abandonment, the building has been subjected to serious crime and property damage. It also dangerously became a local attraction for urban explorers and hobbyist paranormal investigators who were interested in touring abandoned properties. This posed as a significant risk to trespassers because the building was so heavily impacted by mold and other contaminants.

If YouTube is any indication, many paranormal believers have taken a keen eye to Old Copley Hospital under the belief that the property is haunted. Over the last 25 years, the building has attracted countless adventurers who sought to experience it for themselves. Even though the building posed a tremendous risk to the safety of anyone who entered it, this didn’t stop explorers from trying to sneak a peek inside.

Many locals claim to have witnessed some spooky experiences at the property, ranging from strange voices to floating figures. Past patients even recount seeing visiting nuns and shady figures during their time at the hospital. It isn’t too far out of the realm of possibility considering there was an on-site morgue within the facility, and it was located directly underneath the emergency waiting room.

Whether you’re a believer in the paranormal or not, one thing is for sure: Old Copley was in desperate need for restoration.

What Condition Was Old Copley Hospital In?

Before redevelopment, Old Copley Hospital was in extremely poor condition. Each area of the property had been overtaken by vandalism, water damage, mold, and more. The floors were not secured, which meant several parts of the building were missing walkways entirely. To put it simply, the entire hospital was in near-irreparable condition.

In fact, the building was in such disarray that the City of Aurora sued the owners of the building in 2017. The property eventually was overtaken by mold, asbestos, and lead, making it an even larger concern for locals.

Fast forward to 2020, and the property has been professionally remediated and cleaned. This was the first phase of the plan to restore Copley Hospital, with the subsequent phases including new construction and further restoration.

“Whether it be looking at the outside or the inside, it was apparent that reviving the building back to life would be a huge task.”
-Habib Ansari, Architectural Intern at Kluber

Here are some other images that show the condition of Old Copley Hospital after it was abandoned:

Old Copley Hospital plays a major role in Aurora’s history. Because its campus is so large, the property takes up a significant amount of development space in the city. Studies have shown that abandoned buildings can have a negative impact on local communities, sometimes even correlating to an increase in nearby crime rates. For that reason, the redevelopment of Old Copley Hospital is especially important for the city of Aurora.

What is Being Done to Old Copley Hospital?

Here’s what locals can expect from the Old Copley Hospital redevelopment:

The first step in restoring Old Copley Hospital was to have it professionally cleaned and abated. The property was severely damaged throughout the years due to mold, and it was also home to both asbestos and lead. The abatement and cleaning process took approximately 9 months, and construction is underway.

One of the most important aspects of Old Copley Hospital’s redevelopment is maintaining as much of the historic aspects of the building as possible. As such, MacRostie Historic Advisors was hired to assist in the preservation.

An example of an area of the property that is being historically restored is the fifth floor of the 1970’s block building, which at one point was home to a maternity ward complete with a “baby viewing” area. This section of the building will be updated for safety and usefulness needs but will still maintain its historic integrity and recognizability.

“When complete, the reinvented campus community will provide needed homes for both seniors and adults with intellectual and developmental disabilities, healthcare services for this underserved area, a neighborhood park that was a former parking lot, and a new source of needed jobs. I can still remember the first time I set foot on the campus and was totally overwhelmed by the sheer magnitude of the project. It will be amazing to watch this transformation happen that started with an idea by a few local businessmen and being honored that they entrusted the Kluber team to help bring that vision to reality.”
-Mike Elliott, Senior Design Architect at Kluber

In February 2021, Kane County and the Illinois Energy Conservation Authority (IECA) announced $3 million in funding for the Old Copley Hospital Development. The funding will provide energy-efficient updates to the facility, which is the City’s largest investment in decades.

Given how long the hospital sat vacant in the community, there is extensive media coverage about the redevelopment. Click through each of the logos below to see the latest media coverage!

Once construction gets started, it’s only a matter of time until the new facility is up and running. From additional community resources to improving the aesthetic of the neighborhood, locals are excited to see Innovative Living Communities come to life. Be sure to check back to this page to keep up with the latest news on the Old Copley Hospital redevelopment! Want to learn more about Kluber Architects + Engineers? Click the button below!