The Past, Present, and Future of 10 S. Shumway in Batavia 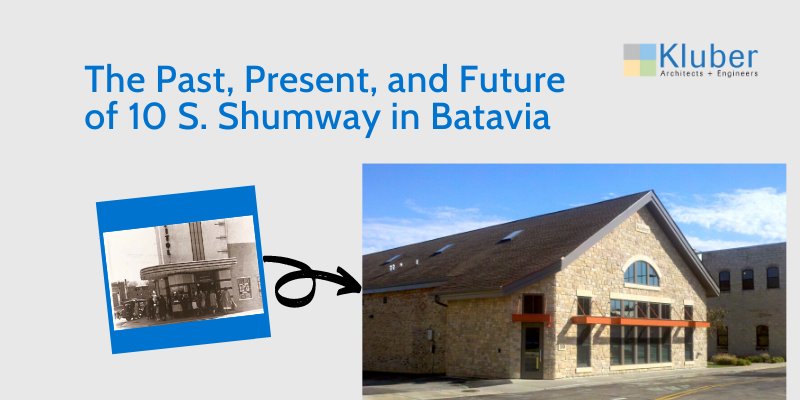 When Batavia MainStreet introduced 10 S. Shumway to Mike Kluber, president of Kluber Architects + Engineers, he was a bit apprehensive. It was 2006, just a few years before the Great Recession, and downtown Batavia was already suffering. Batavia MainStreet was aware of the firm’s growth plans, and knowing Kluber’s expertise in building renovation, felt that they were the right owners to bring it back to life and rejuvenate the Foundry District.

Kluber knew that renovating the distressed property would be a tremendous undertaking. Between its structural instability and its state of neglect, it would be a project that involved a large amount of financial and resource investment. However, it would prove to be one of the City’s most successful developments in its history.

The property located at 10 S. Shumway in Batavia was built in 1880. At the time, the City desperately needed a central area for residents to gather and hold events. For that reason, a group of citizens invested $100 each to fund a two-story Opera House at the site.

The building was a wood structure with a limestone basement and featured a seating capacity of 525. Upon opening in the fall, it would host countless historical performances. John Geiss, who later served as the Mayor of Batavia in 1925, even played in the orchestra for the first dance.

What Happened After the Opera House Opened?

After several years, the Opera House closed and was used as a printing office. However, it wasn’t much longer until the Opera House reopened in 1912 with a redecorated interior, additional seating, and a revamped orchestra. The building was then officially After its reopening, silent movies were played at the Batavia Opera House and it saw a dramatic increase in attendance. There were also live acts played in between films, with admission costing anywhere between 15 and 35 cents. However, the theater would close its doors for the last time in 1957, after which many businesses utilized it as office space.

In 1940, Joe Burke, who leased the building at the time, changed the name of the opera house to “Capitol Theater.” It was then renamed to “Batavia Theater” in 1948.

The Music Hall hosted everything from road shows to local talent. It even served as a roller rink!

This is Timeline description, you can change me anytime click here

Building Reopens as an Opera House

Aptly named “The Batavia Opera House,” the building went back to being used for its intended purpose: entertainment for the local community.

Robbins was part of the Progressive Party and served as Chairman of the State Central Committee.

The Batavia Opera House featured a new program every night, with vaudeville on the weekends. By 1918, the Opera House no longer advertised vaudeville.

Burke also renamed the building “The Vanity Theater” in 1924.

Movies shown at the time included “My Sister, Eileen” and “This Above All.”

The duo operated the theater for several years, naming it “The Batavia Theater.”

Theater Closes for the Last Time

After naming it “The Batavia Theater” about ten years prior, the facility closed its doors. This was the last time the building was used as a theater.

Between its closure in 1957 and the early 2000’s, the property saw many businesses come and go. Eventually, the building became vacant.

A State of Disrepair

After the Batavia Theater closed in the 50’s and the building was cycled through many owners and tenants, it began to show its age. The building’s façade was falling apart, the interior decayed, and it lacked structural stability and integrity. However, this was sadly the norm for the Foundry District in 2006. The area had become an eyesore for the City, despite its unique and well-established history.

Why Kluber Invested in the Building

In 2006, Mike Kluber was an active member of both Batavia MainStreet and the community. He was aware of the City’s plans to revitalize Downtown Batavia, and because they coincided with his firm’s growth and need for more office space, he decided to take the plunge.

Revitalizing the building didn’t just mean bringing it up to code and moving employees in. Kluber, as a resident of the City and a small business owner, firmly believes that small and medium-sized businesses such as his are stakeholders in the community and owe it to residents to invest in it.

“When your downtown districts are in need, community leaders need to step up. Small and medium sized businesses should be motivated to revitalize and support the communities they serve.”
-Mike Kluber, President of Kluber Architects + Engineers

The City of Batavia provided $319,000 in TIF funding, with the entirety of the project costing over $1.4 million. The significant personal investment from Kluber was a vote of confidence in the City, and served as his commitment to improve the future of Batavia.

The Renovation and the Result

Although Kluber considered many options for the building’s renovation (including a five-story commercial building), he ultimately decided on a refinished two-story design. This proved to be the best choice given the impending recession, which in hindsight could have bankrupted our firm had we chose the more elaborate five-story plan.

Kluber’s investment in 10 S. Shumway inspired other business owners to invest in Downtown Batavia as well. An area of town that was previously avoided by most residents is now a welcome and inviting environment for pedestrians, bicyclists, weekend shoppers, entrepreneurs, and more.

The building’s new design incorporated modernization while still respecting the history of the property.

Some of those building features included:

The Next Chapter for 10 S. Shumway

In early 2021, Kluber Architects + Engineers hired a consultant to conduct a community study on the future of 10 S. Shumway. Their process involved soliciting input via focus groups, inventorying current downtown Shumway quadrant business types, studying pre-pandemic and current trip habits of focus group participants, and more. Feedback from the study was used to determine the next best use for the building. Responses from the community included recreational activities, a food and drink menu, and more.

The Results: A Brewery With a Cause

In October 2021, the Batavia City Council unanimously approved a new concept for 10 S. Shumway: A brewery featuring an in-house taproom. Sturdy Shelter Brewing plans to open their doors in Spring 2022 after implementing a 10-barrel brewing system. Their plans for the building also include an outdoor patio and deck that overlook the Fox River.