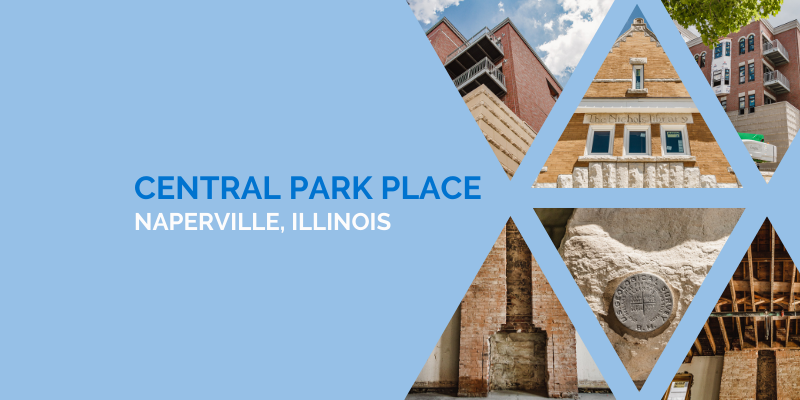 Situated in the 100 block of South Washington Street, Old Nichols Library has been a landmark in the city of Naperville, Illinois for over 120 years. While the building hasn’t served as a library for over two decades, it remains a crucial piece of the city’s history.

Today, Old Nichols Library is being converted into a mixed-use development space called Central Park Place. The building will offer 21 luxurious condominiums, restaurant dining, and more. Before we can truly appreciate the new space, however, it’s important to first learn the history of the building and how we got here.

Join us as we explore the past and future of Old Nichols Library!

When Did Old Nichols Library Open?

Old Nichols Library opened in 1898. Books were provided to the library by the local Women’s Club, and residents also offered an additional 200 books for their collection. Locals quickly fell in love with the library, with its number of books growing each year.

The library became so popular that it quickly outgrew its original space at 110 S. Washington, migrating to a newer building in 1986 that had a larger capacity for books and community resources.

In the first 10 years the library’s original location was open, it had four head librarians:

The phrase “it takes a village” was especially true for the early days of Old Nichols Library. Not only did community members donate books and work for the organization, but they contributed to its success by using the library as a source of entertainment for families.

Who Was Old Nichols Library Named After?

Old Nichols Library was named after James Lawrence Nichols, a local educator and scholar who left $10,000 to the City of Naperville for the installation of a library. His goal was to prevent children from growing up without books, something that, sadly, was part of Nichols’ own life story. He was set on making a difference in the community because of the hardships he suffered as a child. The library that was constructed in his honor was one of the first libraries in DuPage County.

Nichols’ philanthropy didn’t stop there, as he also made sure to leave another $10,000 to North Central College so they could build Nichols Gymnasium. Although it sadly was lost to a fire in 1926, his legacy still leaves a lasting impact on Naperville.

Old Nichols Library was designed by architect Mifflin E. Bell, who was paid $239.48 for his work. Today, that is an inflated worth of approximately $7,607! At the time, Bell was known for serving as the Supervising Architect of the US Treasury Department for three years.

The library design is a unique style known as Richardsonian Romanesque and features an intricate limestone material. Many Naperville-area businesses also feature limestone walls and/or foundation, as it was easily accessible via the natural stone found in nearby Centennial Beach.

Much of Mifflin E. Bell’s work is listed on the U.S. National Register of Historic Places, including but not limited to:

It’s clear Mifflin E. Bell knew what he was doing when it came to designing memorable and significant places, including Old Nichols Library. There would be many additions added to the original library over time, but the original building was an especially important landmark to locals in DuPage County.

It didn’t take long for the library to outgrow its facility on Washington Street. Even though numerous additions were added on over the years, it was clear that there was an increasing need for even more space. The City of Naperville was expanding exponentially, and as such, it needed a much larger and more accommodating library for residents.

In the mid 1980’s, the City of Naperville acquired a new space at 200 W. Jefferson Avenue, and in 1986, Old Nichols Library officially made that its new location. Its new home is approximately five times the size of the original facility, offering more space for both books and events.

The City owned the original Old Nichols Library building until 1995. At that point, it was sold to Truth Lutheran Church where it served as a space for the municipal band, an adult day care center, and more. It was then acquired by Dwight Avram Builders, and recognized as a local landmark, in 2017.

Old Nichols Library was converted into a mixed-use residential space, with the original 1898 building being incorporated into the new design.

The new property offers a unique experience for Naperville residents, adds to the aesthetic of the downtown area, and maintains the historical significance that Old Nichols Library holds.

The original historical library building was retained, while the non-historical additions were removed to accommodate the new space’s needs. In 2022, Gia Mia, a local Italian restaurant, will be moving in to the old library portion of the development. Patrons will be able to dine either outdoors or inside.

It wouldn’t be a true construction process if there weren’t a couple challenges involved! In designing the new space, the original plans included completely demolishing all of the original library structures. However, it quickly became clear that the library holds a special place in the hearts of local community members and that doing a complete overhaul wasn’t ideal.

The challenges didn’t stop there. Once the construction team broke ground, they discovered a big problem: a constant stream of water into the construction site. Because of the natural slope of the land and the soil components, water naturally continued to flow. The only way around it was to install an earth retention system and drainage tile to divert the flow into an interior sump basin. This solution will remain in place throughout the years to continually divert water away from the property and keep it dry!

“The project required the close collaboration of the design-build contractor team and the community to overcome the many obstacles that included tight site constraints, the historical considerations, and difficult existing conditions in order to deliver a high-quality development to the heart of downtown Naperville.”
-Jeff Bruns, Senior Structural Engineer

When it comes to historical buildings, there’s bound to be some interesting tales. Old Nichols library is no exception!

Here are some facts about Old Nichols Library:

With a new breath of life being breathed into the building, the future is bright for Old Nichols Library. We look forward to seeing what exactly that will look like for the residents of Naperville!

The Central Park Place project has caught the attention of locals! Take a look at some of the top news articles that discuss the project, its most recent updates, and more.

See Some of Our Other Recent Projects