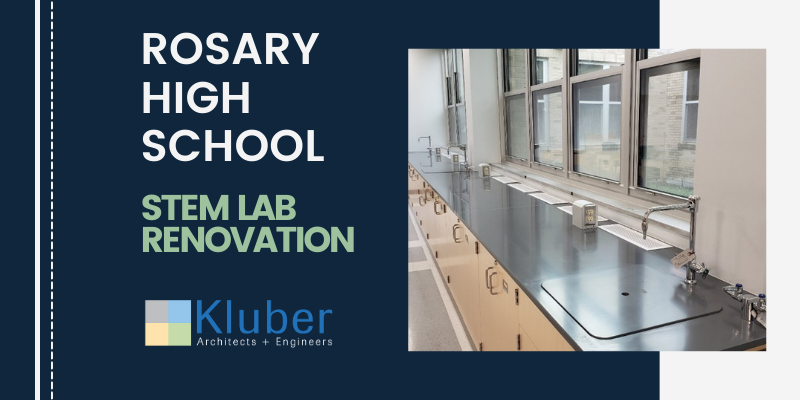 As you pass through the halls of Rosary High School in Aurora, Illinois, you’re met with a maze of winding hallways and gathering areas that have been home to thousands of students since the 1960s. Any school that was built 60 years ago is bound to require some building improvements, and Rosary is no exception.

The facility is known for its high academic standards for its all-girls students, encouraging them to embrace their mission of lifelong learning and truth seeking. It became clear to the faculty that in order to fully embrace that mission, the building would require some updating to maintain its relevancy to today’s world. Specifically, the school needed upgraded science laboratories, also known as STEM Labs. Kluber Architects + Engineers was selected to renovate the school’s existing science classrooms and, in return, modernize its curriculum.

When Did Rosary High School Open?

Rosary High School opened in 1961 in Aurora, Illinois. At the time, classrooms were used for more than just one subject to maximize space. Both Home Economics and Sewing were taught in the science classrooms, which meant students were learning chemistry alongside sewing machines.

As the years progressed, educational needs for science classrooms have evolved immensely. Gone are the days when students simply required a textbook and basic lab equipment to learn the basics of science. Today, technology is a tremendous resource when education students on science. Despite the aging equipment and appearance, Rosary High School students were still three times more likely to choose a career in STEM-related fields. As such, the Board of Directors made the decision to match the students’ educational goals with the space and equipment offered at the school. From there, Kluber Architects + Engineers was selected to complete the task of renovating the classrooms.

“A renovation was greatly needed to provide an updated space to educate young women on the advances in science and technology.”
-Amy McMahon, Head of School

The existing science classrooms at Rosary High School lacked proper technology setups, efficient lab stations, exhaust systems for labs, and more. Additionally, teachers were limited in their teaching methods as they had inadequate space near the front of the classrooms. Kluber’s goal was to incorporate the science department’s modernization needs without losing sight of proper classroom design and layout.

The science classrooms that students were using in 2019 were the same as what students were using in the 1960’s. As you can imagine, the 1960’s aesthetic was also still alive and well in the science classrooms. Our project team was dedicated to modernizing the aesthetic when feasible, with the end goal of inspiring Rosary’s students to become even more engaged with the subject matter.

Rosary sought to improve three existing science laboratories and convert two existing labs into one large prep room, with the overall goal of enhancing the students’ educational experience.  There also needed to be a way for students to view video content on large monitors when needed.

These new renovated classrooms needed to include the following:

Additionally, it was critical for the classrooms to be designed in a way that facilitated a comfortable learning environment. Whereas the original science classrooms featured harsh overhead lighting, the new layout would utilize skylights that were previously contained in a rarely-used storage/prep room. Small changes like lighting were to accompany larger goals such as new equipment, brand new tables, and more.

By enhancing both the technology and the aesthetics of the space, the science curriculum is all the more appealing to its students. The combination of the department’s new technological capability and unparalleled comfort will attract new prospective students and expose them to an area of study that is so greatly needed in today’s job market.

In a building that has seen as much life as Rosary High School, there is bound to be some challenges when it comes to incorporating updated building and interior designs.  For this project, one of the biggest challenges was the 70-year-old underground plumbing pipes that needed to be replaced.

Another challenge was the hurdle of imagining what it would look like for staff to teach differently. The existing layout and equipment were all they had ever known, and with that level of comfort comes a bit of hesitance in envisioning different possibilities for the room. However, it wasn’t long until the new space was completely reimagined with staff and students alike excited for what was to come.

“These new labs will launch the Rosary students into the twenty-second century and prepare them to be leaders in the STEM industries. This is the most exciting and transformative project in years.”
-Charli Johnsos, Project Manager

In addition to expanding the footprint of existing classrooms and renovating their aesthetics, there were several key efficiency features and technology upgrades added to the new STEM labs.

Some of the most notable features include: With these newly designed science classrooms, Rosary High School’s students are adequately prepared for the next phases of their education. The possibilities are endless when it comes to the teaching methods in the school’s STEM curriculum, and although technology is always evolving, Rosary High School will be poised for success in current and future technology needs.